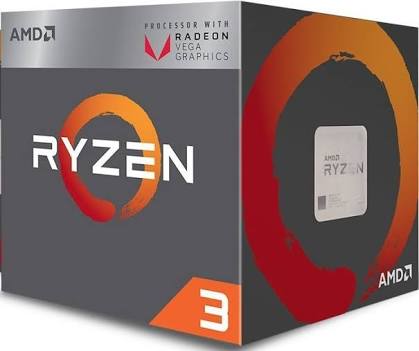 . It will be your best affordable Gaming CPU.

This is the different type of processors which has integrated graphics card which is powerful enough to play games & the Best Budget Gaming CPU AMD Ryzen 3 2200G Vega 8 is equivalent to the GT 1030 which is an External graphics card. So, it will be able to give you the more good performance in gaming as compared to Intel UHD 630 which are launched recently.

You will able to play all kind of the games nowadays like GTA V, Battlefield 1, Watch Dogs, Far Cry Primal etc with getting the 29-60* FPS (avg.) It will also well performed as a CPU cause of they are really good processors for your home, office etc.

Best Budget Gaming CPU AMD Ryzen 3 220G Vega 8 comes along with 4 cores 4 threads, socket type AM4 & clocking up to 3.7Ghz which is going gives the great performance while you working with heavy usage applications. If we talk about the GPU of this processor which has 8 Radeon Vega Cores with (512 ALUs) & clocks up to 1100Mhz. This is an unlocked processor so you boost your CPU when needed. It also comes along with the Wraith Stealth Cooler (Thermal Solution).

This site uses Akismet to reduce spam. Learn how your comment data is processed.